A Day in the Life of an Optometry Student

Whenever we move forward to a new phase in life, it’s reassuring to have at least some idea of what to expect. To give you some food for thought as you look ahead to attending optometry school, we asked two current students, one first-year and one third-year, what their typical day is like. They’re working hard, but they also describe what they’re doing as productive, interesting, informative and fun.

First Year: Settling in and Rolling Up Your Sleeves

Senija Vehab, a first-year student at the Illinois College of Optometry, is an early riser, at 6:30 a.m. on exam days (exams are always at 8) and 8:30 a.m. on most other days. On exam days or days when she’s busy with her required lab time, she heads first to the ICO cafeteria to grab breakfast. On non-lab days, she likes to take a run along the Lake Michigan shore trail, which is a half mile east of campus. It it’s too cold (this is Chicago, remember), she hits the gym instead. Her class lectures take place from 2 to 6 p.m. most days and from 9 a.m. to noon on Fridays. “After lecture at 6 p.m., everyone eats dinner in the cafeteria,” she says. “After dinner I typically go back to my room — I live at the resident complex, which is right across the street from school — and plan what I want to study or work on that night. Usually, it’s studying for the next exam. Some students like to study into the wee hours, but I prefer to study no later than midnight so I’m fresh for the next day. Everyone has their own schedule, and I found that figuring out what worked best for me was important.”

In addition to her coursework, Senija does work-study, last quarter as a technician at the Illinois Eye Institute on Thursday mornings and now at the security desk in the resident complex on Monday nights. She also serves as a Trustee-Elect for the American Optometric Student Association and plays intramural flag football or soccer, usually one evening a week. Although getting her studying done first is always her goal, she says “Saturdays and Sundays are different because I can plan something fun to look forward to during the week. I’ve met some great people at ICO. School keeps us busy, but we can usually find time to just hang out, whether that’s watching a movie in one of the lounges, playing ping pong in the game room, or getting ice cream in the city while it’s snowing. And of course downtown Chicago is always fun and adventurous.”

Comparing the first year of professional school to her undergrad years, Senija says she expected it to be busy and it is. “Sometimes it’s challenging to attend class right after studying for an exam, for instance an ocular anatomy lecture at 9 a.m. after just taking the ocular anatomy exam that morning. All of our lectures are taped though, so that adds some flexibility. And unlike in undergrad, everyone is in the same boat as you with the same ‘major.’ We’re all studying for the same exams, attending the same labs, doing the same practicals. We’re always with our group, everyone knows what we’re going through, and it’s nice because it’s our family away from home.”

Third Year: Buckling Down for the Boards 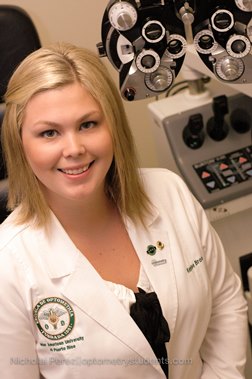 Keylee Clemons Brown, a third-year student at Inter American University of Puerto Rico School of Optometry, was recently able to exhale after taking Part I of the national boards in March. With that experience still fresh in her mind, she divides what her typical day is like into two distinct categories: before boards and after boards.

Like the days of third-year students at most schools, Keylee’s are divided about 50/50 between classes and clinic. But starting last June, she added studying for Part I of the boards to her schedule by reading Remington’s Clinical Anatomy and Physiology of the Visual System. Over Christmas break that year, she worked on flash cards, and in January of this year she set a regimented study schedule for herself. The goal for January was 10 hours a week, about half on the weekends. February’s goal was 15 hours every week. For March, studying was her total focus. “As boards approached, there was very little time for anything other than eating, sleeping, studying and maybe getting in a workout here or there,” she says. However, after the big day and a couple days of post-exam recovery, Keylee had some free time, during which she did some traveling, including attending Vision Expo East in New York City. Now, life is back to how it was prior to the board exam.

Keylee notes that her day is similar to other third-year students’ in that she’s going to class and clinic, but she also likes to be involved in extracurricular activities and leadership positions. She’s been involved with the American Optometric Student Association since her first year. She’s served as a Trustee-Elect and a Trustee and recently stepped into the role of Secretary on the association’s Executive Council. In her experience, “The busyness goes in waves. There are times when you have a lot of free time and times when you don’t. You have to prioritize so that you can get your school work done and still have time for yourself. Now that I live on an island, I try to go to the beach when I have extra time on the weekends. I also enjoy running outside, shopping, exploring new places and traveling.”

Keylee says third year has been challenging, balancing clinic, classes and studying, but she has really enjoyed it. One reason is the classes are solely optometry-related. She looks forward to fourth-year, when the focus will be on working with patients. “Fourth-year supposedly allows for a little more free time since studying for classes in the usual sense is not part of the mix. It will be great to rotate through the various clinics in Puerto Rico and in the states and learn more about all the different specialties in optometry. Then, it will be time to look forward to graduation!”

Blog
Optometrists Make a Difference in Daily Lives
Are You Ready for the OAT?