Information about Careers in Optometry 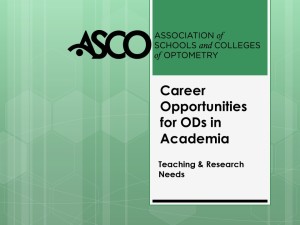 ASCO is concerned about the continuing recruitment of optometry students and optometrists into graduate programs. Traditionally, individuals with both optometric credentials and another graduate degree have formed the backbone of the faculty at optometric institutions. Some in optometric academia have expressed that an increased emphasis on medical eye care has perhaps decreased the value of graduate credentials and may have been partially supplanted by residency education, a substantial patient-based experience, or both. Likewise, the recent proliferation of new programs at universities where research is emphasized less among faculty has also altered the balance of faculty.

In 2012, with these concerns in mind, the ASCO Academic Affairs Committee (AAC) began implementing elements of A Marketing Plan for Graduate Education in Optometry (which was approved by the ASCO Board at the 2011 Annual Meeting). The first element of the plan featured a presentation by Dr. Mark Bullimore (an AAC member at the time who spearheaded the plan’s creation) about graduate education opportunities during a main session at the 2012 AOSA meeting. With the creation of a PowerPoint presentation, entitled Career Opportunities for ODs in Academia: Teaching & Research Needs, the AAC fulfilled the second element of the plan by creating a stand-alone information module that explores the need for increasing  faculty ranks at optometric institutions. The PowerPoint was updated in April 2017.

Another step in the marketing plan occurred in 2015 when the AAC collaborated with the American Academy of Optometry to create a unique workshop for students attending the American Academy of Optometry meeting in New Orleans entitled Charting Your Career in Academic Optometry and Research: A Session for Optometry and Graduate Students. Experienced clinician scientists provided students already in, or considering, research degree programs with helpful information on performing research in optometry and vision science and the career paths that they can lead to in academic optometry and the vision care industry.

A second AAC-Academy session was held in Chicago in 2017. These two formal sessions were followed more recently by informal Q&A events for students and residents, called Ask the Experts, held at the ASCO exhibit hall booth at Academy and at the Academy’s Resident and Graduate Program Fair.

The Academic Affairs Committee continues to focus their efforts on printed materials and additional events to promote the recruitment of optometry students into the academic profession and careers in research. Information about new endeavors will be highlighted through social media and the ASCO newsletter.