A few years ago, when Jessica Rodriguez was about 10 years old, she got a stye in her eye. She wondered why and how and she thought, “What if l become a doctor and treat kids like me with the same illness?” Now starting eighth grade at Indio Middle School, part of the Desert Sands Unified School District in southern California, Jessica is doing more than wondering. She’s following the PreMed Academy tract, an elective program available to all Indio Middle School sixth- seventh- and eighth-graders that exposes them to the variety of careers available in medicine and the health professions.

According to PreMed Academy Instructor Nancy Rhynard-Kounovsky, “PreMed Academy has served 250-275 students each school year since its inception in 2004. During the three-year program, students move from the basics of human body systems and their associated illnesses to tackling subjects such as optometry,dentistry, forensics, veterinary science, pharmacy, acupuncture, sports medicine, epidemiology, and so on. Lessons, however, go beyond note-taking and videos. Students learn through various labs and activities, true to the medical profession, in the classroom and out in the community. Among other activities, students tour all of the local hospitals and learn American Red Cross CPR and First Aid.” PreMed Academy was among the reasons Indio Middle School was honored as a 2018 designee in the “Schools to Watch – Taking Center Stage” program run by the California Department of Education, California League of Middle Schools and other organizations.

Fueling Interest in Optometry as a Career

Jessica recalls the PreMed Academy class in which Rhynard-Kounovsky coordinated an eye dissection as “an amazing experience.” Angel Gutierrez, who is also in eighth grade this year at Indio, first became interested in optometry when his sister told him about it when he was 10. He says the Academy helps him toward his goals “by letting me experience how it is to be an optometrist and teaching me about other medical careers.” The broad scope of what students learn is an aspect of the program that Maribel Aguilar also likes. Her daughter Monika is an eighth-grader participating in year three. “It exposes her to medical careers and lets her keep her options open,” Aguilar says. “I especially like that it enhances the sciences taught at the middle school level.” Aguilar says she was relieved when Monika told her she wanted to be an optometrist because it shows she’s thinking about her future. “Usually in middle school, they’re just thinking about high school,” she says. Monika had been eager to start her second year of PreMed Academy. “I wanted to learn more and feed my curiosity,” she says. “Then when we started optometry with Mrs. Kounovsky I was excited to learn about the eye. We started to go deeper into the subject, and the more I learned the more I wanted to consider optometry to be my career choice. Pre-Med Academy not only helps me dream about optometry it actually allows me to act upon it. It lets me learn so many things about the eyes and allows me to explore the opportunities and career choices in the optometry field.” 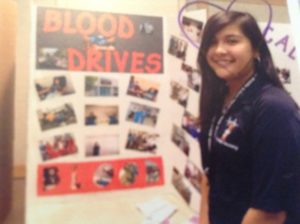 Monika Aguilar speaks to the school board and members of the community as part of “Front and Center,” an event where students in specialty programs such as PreMed Academy share what they’ve been learning and doing in their classes and extracurricular activities

Some of the students in Indio Middle School’s PreMed Academy also participate in an outside group known as JUMP (Junior Upcoming Medical Professionals). JUMP is the Middle School Division of Health Occupations Students of America (HOSA), an international student organization recognized by the U.S. Department of Education and the Health Science Education Division of Association for Career & Technical Education. Its two-fold mission is to promote career opportunities in the healthcare industry and to enhance the delivery of quality health care to all people. JUMP engages students in a variety of ways, including regular meetings, field trips and lessons on topics such as medical math, health education, teamwork strategies and leadership skills. JUMP events give members the opportunity to showcase what they’ve learned. For example, at the Spring Showdown, different schools compete in contests such as Medical Trivia and Medical Spelling Bee.

After eighth grade, Indio Middle School students have the option of attending one of several district high schools that also have medical career academies. Similar pathways to an optometric or other health professions career can be found throughout the country. Blair Lukwago is one of many students seizing the opportunity. She’s been interested in optometry for quite some time. “I was very young when I first thought of becoming an optometrist, probably age 6,” she says. “Of course the word optometrist wasn’t in my vocabulary at the time, but I always told people I wanted to be an eye doctor when I grew up.” Blair’s attraction to optometry stems from having to get glasses at age 3 and visit the optometrist frequently for prescription updates. She says it was tough wearing glasses so young — her classmates were constantly asking her why — but as she got older she became fascinated by the tests the optometrist performed. “I started to memorize the different tests that I had to go through and I always tried to repeat them on my parents,” she says. Blair’s interest in optometry hasn’t waned and she chose to attend Arthur A. Benjamin Health Professions High School, which is part of the Sacramento City Unified School District in California. She’s a senior this year.

“Arthur A. Benjamin is a public high school that embeds health industry themes and topics into all of our core college prep curriculum, not just our Career and Technical Education courses,” explains Principal Marla Clayton Johnson. “Students take Medical Biology, Medical English 9-12, Medical U.S. History and Medical Spanish for the Healthcare Professional, to name just some of our courses. We also offer work-based learning opportunities such as job shadowing, internships and long-term work partnerships with industry partners small and large around the Sacramento region. We want to expand diversity in the healthcare industry so we are open to all students.” Blair has already completed one internship. From June through August 2017 she worked in the Materials Management Department at Shriners Hospital. Other health professions high schools operating around the country include Health Professions High School in Orangeburg, S.C., High School for Health Professions and Human Services in Manhattan, N.Y., and Memphis Academy of Health Sciences High School (and Middle School) in Tennessee.

Keeping a Focus on the Future

One of the questions Eye on Optometry asked all of the students is whether they look even further into the future to when they might actually be optometrists. All said yes. Monika visualizes herself helping her patients and having good relationships with them and her coworkers. “I would like to see my patients happy when they get their new pair of glasses,” she says. “And I would like to make my young patients smile when I check their eyes. Maybe I will make an adult smile too.” Blair says she wants to be like her optometrist and have “that beautiful-looking office that I grew up in with all the eye equipment that surrounded me. I can see myself using the equipment on my patients to help them with their vision problems and prescribe new lenses for them. I can see myself having my own office someday so I can check my parents’ eyes for real this time.”