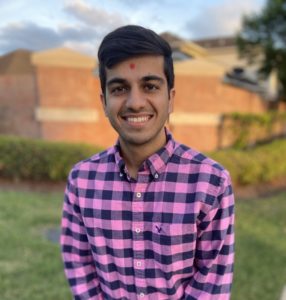 I find the act of “fitting in” incredibly exhausting. “Fitting in” implies there are pre-requisites to belonging. Such terminology has pushed me to exhaustingly reevaluate my progress each step of the way and constantly question whether I had finally achieved that dream of “belonging.” You would think being admitted into a doctorate program would be enough to silence my insecurities. The Optometry Admissions Test was over, I was admitted into The University of Houston College of Optometry, and yet I found myself staring at my Anatomy and Physiology Lab Midterm grade wondering whether I could (or would) ever become a good doctor.

My name is Shail Gajjar and this is the third lesson I learned in my first year of optometry school:

Lesson 3: When your sense of self-worth is rooted in comparisons to those around you, you’ll find yourself drowning in constant parasitic competition. To sum it up concisely: learn to learn, and let go of the idea that grades define the trajectory of your doctorate journey.

Imposter syndrome is no joke. I imagine many students have found themselves wondering whether they belong. Despite having been chosen for the program, students might find themselves “competing” with each other rather than synergistically working together to become the best doctor that they can become.

I’ve grown up a Type-A person. I was someone who was obsessed with scoring as high as possible. This mentality was only further reinforced by the OAT thanks to the percentiles that were conveniently printed alongside each score. Even throughout undergrad, all my professors would provide a “class exam average.” I inadvertently found myself comparing my scores to this average. If they were lower than the class average, I had failed on my part, even if my grade was an A. It didn’t help that I was younger than many of my peers. My younger age reinforced my constant ambition to prove I belonged.

Doesn’t that sound horrible? If you answered yes, you’re spot on. There was no end to the cycles of comparison. Each clicker question, each quiz, each exam, each hangout had at least one instance of comparison. I approached the first half of my OPT I in this very same manner. I evaluated my performance based on where I fell on that wretched bell curve. As you might imagine, this version of me was demolished when I saw my score fell in the bottom quarter percentile on the Anatomy Lab Midterm. It was my lowest test grade, ever.

I wish I could tell you what my “EUREKA” moment was, and teach you some life-altering lesson. Unfortunately, life is not always so black and white. Some lessons settle in slowly. The below is my current understanding on this topic, after many more exams:

Competing with your classmates with the intent of superiority will irreversibly scar your relationship with your colleagues. At the end of the day, perhaps you do score better than your classmates. Perhaps you do achieve that “self-worth.” What will this achievement cost you? What did you gain? A comforted ego? Some condition-based friendships?

There is a winner and a loser in a competition. Meanwhile, there are only winners in a team effort. To conclude, treat your classmates as teammates. Their successes are successes for you too. Your triumphs are triumphs for them too. Why? Because at the end of the day, pushing each other to become better will ultimately benefit the patient. And that is the whole purpose of a health professional.