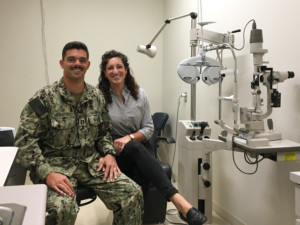 Editors note: Thank you Dr. Schaffner for your service!

Why I became a military optometrist
My desire to serve my country in the Armed Forces is what actually led me to pursue a career in optometry.  I come from a long line of family members who have served our country in every armed conflict that the United States has been a part of. I have a great-great-great… (I do not know how many “greats”) grandfather, Major William Gill, who served as the aid to General George Washington in the American Revolution. More recently, both of my grandfathers served, one of which served in the Pacific theater in WWII, and my father and his brothers all served in the Navy. My father, who made rank of Commander in the U.S Navy Dental Corps, is my biggest role model for wanting to serve in the military in a health care capacity.

When exploring health care fields within the Navy, I came across optometry as a Health Professions Scholarship Program (HPSP) career. HPSP is a scholarship in which the Navy provides full coverage of medical, dental, or optometry school costs and allows for direct accession in the Navy as a commissioned officer.  As I read about a career in Navy optometry, the opportunity to serve our nation’s heroes in a mission-critical role was too good to pass up.

Optometry school experiences prepared me for this career
The University of Alabama at Birmingham School of Optometry absolutely prepared me for taking on the challenges of meeting ocular and vision care needs of our nation’s servicemen and servicewomen. The diversity of our patients at UABSO provided me the opportunity to clinically diagnose and treat patients from a large variety of cultures, backgrounds, and predisposed medical conditions. The Navy and all U.S. Armed Forces are composed of very diversified groups of people from different nations, backgrounds, and cultures, much like my experience at UABSO. My well-rounded experience at UABSO as a student equipped me with the tools and confidence to be able to provide quality ocular health care for our diverse military population.

Also, during my fourth year in-school rotations, I was able to sneak into two rounds of TBEye Clinic in my last year of optometry school. In TBEye Clinic we provided comprehensive and specialty eye exams to UAB athletes, students, and members of the community who have experienced traumatic brain injuries. We examined every facet of ocular health and vision, which included ocular pathology, vision loss, and binocular vision deficits post-concussion. One of the biggest learning takeaways from TBEye clinic was that we could help facilitate neurological healing for our TBEye patients by simply addressing undercorrected refractive errors, binocular vision anomalies, and impaired proprioception. These skills became especially handy when treating servicemen and servicewomen who have undergone head injuries secondary to high risk activities by the very nature of their military jobs.

Not only are we taking care of Marines involved in aviation and aviation support, but we also see patients from all other branches of the military including Army, Navy, Air Force and Coast Guard.

At Naval Medical Center San Diego and the surrounding branch clinics, we have multiple externs rotating through optometry clinics at any given time. I am afforded the opportunity to teach fourth year optometry students from several different optometry schools as adjunct faculty. Students often find their Navy rotation very enjoyable as they get to practice proficiency on active duty military patients from all over the country and even the world.

Being a Naval Officer often requires time away from the clinic to fulfill other leadership roles and training. Training can be as mundane as hours of PowerPoints to as exciting as learning how to escape from an underwater helicopter crash upside-down in the dark via pool simulation!

As an optometrist in the Navy, providing vision and ocular care is mission critical for the many occupations like pilots operating aircraft, submariners navigating subsurface, and special operators and Marines maneuvering in nighttime operations. I am so grateful and honored to have the opportunity to serve America’s heroes every day.