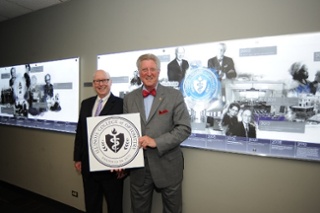 The first recollection I have of interacting with ASCO Board members goes back to the early 1970’s when I was a young and naïve faculty member of The Ohio State University (OSU). Dr. Frederick Hebbard at that time was Dean of the OSU College of Optometry. He had followed Dr. Glenn Fry who was the Director of the optometry program before it gained independent college status. Dr. Hebbard had arranged for a meeting at the then new Fawcett Center on the OSU campus and had invited ASCO representatives to attend. I remember meeting Dr. Meredith Morgan, Dr. Henry “Hank” Peters, Dr. Bill Baldwin, Dr. Norman Wallis, Dr. Wid Bleything, and Dr. Henry Hofstetter among many other attendees representing the schools and colleges of optometry existing at that time… half the number of institutions we have today. These “guys” could talk, and talk, and talk. They were brilliant but highly opinionated leaders and I felt privileged to meet them.

Later, in the 1980’s it was my honor to accompany Dr. Richard Hill, then the OSU Dean, to the ASCO meetings and sit in the back chairs. While the number of institutions had grown to 17 by that time, the Directors, still all “guys,” easily fit around a single large table. During that time there was an initiative to involve more institutional people in ASCO committees and that had benefits both for ASCO and the participating member institutional participants. The debates between Dr. Norman Haffner and Dr Dick Hopping were memorable parts of our long ASCO meetings at that time.

In the early 1990’s, I attended my first ASCO meeting as the new Dean of the University of Alabama at Birmingham School of Optometry and for the first time was able to sit at the big table. During the 1990’s the concept of SIGs (Special Interest Groups) took hold and many interested institutional faculty and staff participated in broadening the reach and effectiveness of ASCO by sharing best practices. I was privileged to serve as President of ASCO during this decade, but needed to step down from the ASCO Board for two years when I served as Interim Provost of the University of Alabama at Birmingham.

During the 2000’s, I had been appointed the President of the Illinois College of Optometry (ICO), an optometric institution which traces its roots to 1872, before we even referred to what we do as optometry. Indeed, the institution functioned under the name of the Illinois College of Ophthalmology and Otology. ASCO was not founded until 1941 during a time of great stress in schools and colleges of optometry since so many of the prospective students, still mostly male, were serving in World War II and not enrolling in college. Talk about an application crisis!

In my role as President of ICO, I have less involvement in the day to day education and clinical training of our outstanding doctors of optometry (we Presidents are busy raising the institutional flag and raising money). The important work of the welfare of our students, and our educational and patient care programs, has been delegated to our Academic, Student Affairs, and Clinical Deans. I’m pleased to observe that most of my colleague CEOs have also encouraged their Deans to have an even bigger presence in ASCO and this has benefited us all.

I have now finished my forty-fifth year in higher education, and am more enthusiastic, though less naïve, than I was in 1971. It has been a work of love to toil with so many ASCO colleagues over the last five decades to literally change and expand the profession of optometry, and to do it in such a way that the educational underpinnings at our 23 ASCO institutions will support the expanded and publically needed role of optometrists as primary health providers… providing expertise in matters impacting our patients vision, eye health and systemic well-being.

ASCO has been important. ASCO is needed now even more than ever in its 75 years. The contemporary version of ASCO does it by broadening the definition of “guys” to apply to men and women.

Congratulations to you fellow ASCO Board members and Executive Directors for making this work!