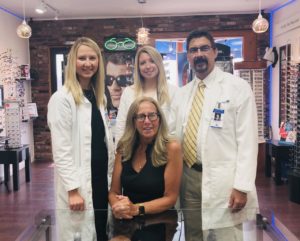 Aroostook County, Maine is a large geographic area that borders Canada.  However, it is home to a small, tight-knit community with a variety of eye care needs.

Family Eye Care and Mavor Optical is a private, family-run practice that is four generations in the making. The Doctors of Optometry there serve Aroostook County and its residents with pride and a genial attitude. The practice has two locations in Presque Isle and Caribou, Maine—both towns in the community of Aroostook County.

Dr. Craig Small has run the practice for close to 35 years, with his wife Jane on site as the optician.  His two daughters, Paige and Abby, recently returned home as Doctors of Optometry when they graduated from the optometry program at Massachusetts College of Pharmacy and Health Services in Worchester, Mass.

Abby, 27, discussed her deep feelings of pride and gratitude to get to serve and practice in the community that helped raise her and her sister.

“Paige and I feel so glad to be able to work with our dad and come home,” Abby said.

She talked about how much she enjoys being a part of a family of four generations of optometrists.  Some patients she and Paige see had seen their great-grandfather when the practice was in its first generation.

“It is quite interesting to see the changes, and how the schooling has changed as well,” Craig said.  He says seeing the girls practice with him, and observing the differences between how he was educated and how Abby and Paige were educated makes him want to continue improving his practice.

Paige, 25, explained how the community shapes how they practice in Aroostook County, as well. She said the county is unique and so is the location.

“A lot of people aren’t willing to travel if you tell them they have to go to Southern Maine,” Paige said.  She elaborated that it was a fair concern, since Aroostook County borders Canada.  Paige and the family have seen a variety of different ocular diseases and conditions, and they’ve had to have a broad practice, since they can’t refer to specialists due to their location.

Abby said that during her time at clinic in Worchester, she functioned as an affordable resource for people who didn’t seem connected to the community and migrated from other places, but still resided in the area. The clinic helped her get a broad sense of practices and technologies in the optometry field, though.

“We felt like it was important to go away and learn these skills and bring them back to these people we grew up around,” Abby said.

Craig was happy to work in his private practice because it motivated him to be more in-touch with the patient and their needs—he and his daughters weren’t restricted by tight schedules and unfamiliar administrative practices.

“In different settings I’ve seen and worked in,” he said, “I like private practice mainly because I feel like I have a vested interest in the community.  In order for me to succeed in my practice I feel like I need to take care of the people I see.”

After finishing optometry school, Abby and Paige reflected on what they would tell students who are studying in that type of setting now. They agreed that it’s important to take advantage of all of the resources a student’s school gives them.

“We (Paige and I) were part of a club that did a program where they would walk with visually impaired patients on the weekends,” Abby said.  It was interesting for her to see how pervasive the effects of a visual impairment can be to a patient’s daily life.

“I felt like it was great to take advantage of all of the opportunities to go to different conferences,” Paige said.  She heard before going into optometry school that optometry education was home to a small community, but she really saw what that meant when she went to conferences and made connections with her fellow future Doctors of Optometry.

Family practices play an important role in communities like Aroostook County, and will continue to do so, according to the Small family. They allow for patient education, effective relationships between doctor and patient, and freedom from quotas and impersonally-dictated schedules.

“I feel like patients shouldn’t have to be their own advocate,” Abby said, “it’s the responsibility of the doctor to be that advocate.”