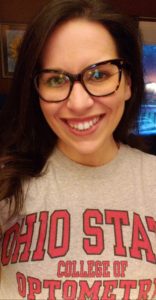 Sometimes two dream careers don’t seem compatible, like medicine and fashion. Life has a funny way of working out, though. At four years old, Dr. Katherine Fisher was sure she would be a fashion designer. She wanted to be a doctor too, though. She told her mother that she would be an eye doctor.

She was able to fulfill that dream. After graduating from The Ohio State University, College of Optometry in 2018, Fisher has her own practice in Dayton, Ohio.

We know that we wear glasses because we need them to see, but in recent years we’ve seen more trends of glasses being used as fashion accessories, as well. Big-name fashion brands like Gucci, Versace, Prada, Chanel, Coach and more manufacture glasses these days.

At the 2018 Oscars, Lupita Nyong’o wore two-toned cat-eye glasses that made fans on Twitter gush and revive the Twitter account from 2015, @LupitaGlasses. Fans started the account in 2015 after her watching Nyong’o wear Ray-Bans-esque thick, two-toned frames at the Golden Globes that year.

In 2019, Fisher saw an influx of glasses on the red carpet. She said, “I noticed when I watched the Oscars this year that a lot of the celebrities were wearing glasses as an accessory with their designer looks.”

Twitter users noticed, as well, and were glad to see not only the aesthetic looks of the glasses, but representation of people who need glasses and use glasses. User @heloeloila tweeted, “for someone who is wearing glasses their whole life and usually meets people trying to avoid wearing them—seeing actresses coming to stage wearing glasses is super-important #Oscars.”

Fisher has noticed a shift in the attitude towards these common tools that help us see every day, “People used to wear glasses because they needed them to see,” she said, “but now there is a style factor.”

Fisher said that she feels fortunate to work in an office with opticians who help patients find the correct glasses for their face shape, personality, and style. While she still had a few experiences with patients who were hesitant to wear glasses, she maintains that, “We have a frame for just about everybody.”

When Fisher has time between patients, she enjoys helping patients decide on the best frames for the patient.

“I think the patients appreciate another opinion most times,” Fisher said.

Fisher explained that she, as she assumes any health care professional does, loves helping patients and that was why she became a Doctor of Optometry.

“I also love helping people feel comfortable in their own skin,” she said, “and feel better about their appearance.”