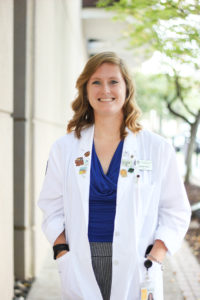 Autumn Killop, is a contributor to the ASCO blog but now is the subject. As a third-year student at the Southern College of Optometry, Killop has the opportunity to engage in clinic practice this year, and reflect on the last two years. She finished her midterms in early June, and has a lot to say about her educational experience as an optometry student.

“Last year I had numerous chances to network, opportunities to attend conferences, and gained experience organizing meetings, fundraisers, and other events.”  Killop said, “It was a busy but rewarding year.”

Killop said that her first year classes were heavily focused on laying a groundwork for her second year and beyond. Her classes revolved mainly around anatomy, mathematics, and optometric theory.

The second year courses had more clinical applications, and by the spring semester, Killop was taking mostly eyeball-related classes. Her material narrowed in focus, and she was challenged to think more like a practitioner and dedicate more energy to assessing solutions to potential scenarios in a clinical setting.

“There have been situations where I felt confident in my abilities and others where I either learned from a mistake or something I had never seen before,” Killop said.

In her third year, Autumn gets to participate in what is known as “clinic,” where she applies her learning to actual patients in an office setting.  She’s only a few months in, but she is loving the experience. She said she’s been looking forward to clinic the most, and she’s seen many different types of cases already. She’s applied lecture material to real people instead of her classmates, and it’s a whole new learning experience for her that she truly enjoys.

“Everyone always has a smile on their face that brightens your day, and they are a crucial part of the support system that makes this school so incredible,” Killop said of SCO.

Part of Autumn’s enthusiasm for learning and what she does could be attributed to the learning environment at SCO. She says that the student life is amazing, and she has plenty of opportunities to achieve “the best educational experience possible.” There are student organizations for aspiring Doctors of Optometry on campus, state clubs, and more that hold events during the year. From these events, students can usually grab a free breakfast or lunch. She holds the school’s faculty and staff in the highest regard, but her favorite part about SCO is the welcoming and kind environment she sees on campus.

“The clubs on campus reach all types of ethnicities, backgrounds, and cultures that provide opportunities for students.” Killop said.

Memphis, where SCO is located, is also a thriving city to learn in. When students need a study break, Killop says it isn’t hard to find one. There are always events such as fairs, festivals, concerts, trivia, and tournaments.

If Killop isn’t grabbing a meal from the campus events, there are plenty of places to eat in Memphis that she loves, as well.

“I love when family and friends visit me because I find a new restaurant to take them to, in addition to the ones I take everyone to—Brother Juniper’s for breakfast and Central BBQ for lunch or dinner,” Killop said.

After graduation, Autumn has a couple plans. First, she wants to pursue a residency. She’s not sure what type yet, but she’s counting on clinic this year and externships next year to help her narrow it down. She’s thinking a residency in ocular disease would complement her life goals best. Her ultimate goal is to be a volunteer in the U.S. and abroad to help those who need care most. Her first step after her residency, she hopes, will be to participate in the Volunteer Optometric Services to Humanity Corps. The program focuses on creating sustainable eye care in developing nations.

Her advice for prospective students—optometry holds opportunities for people of all motivations. There are career opportunities, as well as volunteer and service opportunities of all kinds for Doctors of Optometry, from practices to Native American Reservations.

The future of optometry also excites Killop. She says that sub-topics in the field and the scope of practice are not only expanding, but thriving. The U.S. just saw a fifth state legalize the scope of practice for Doctors of Optometry to include surgical procedures. With an aging population in the United States, the nation will see an increasing prevalence of diseases like diabetes, glaucoma, and hypertension—all of which can be detected by Doctors of Optometry.

“It is a promising and exciting career that I have been wanting to be a part of since I was nine years old.  Fourth grade Autumn would be so proud,” Killop concluded.

Blog
Future Optometry Student: Ciara Knapp
Why You Should Choose a Career in Optometry