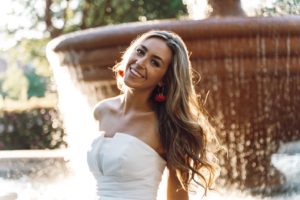 Most students entering college have no idea what they want to do, and once they decide what they want to do, they change it. According to the National Center for Education Statistics, 80% of college students change their major at least once. This was not the case, however, for University of Mississippi (Ole Miss) student, Ciara Knapp.

Knapp is a first-generation college student who entered with a passion for science and a desire to be a Doctor of Optometry, and she is now in the process of choosing an optometry institution. Thus far, she has been accepted to several schools, and has been offered scholarships as well.

“I also enjoyed the tour section of the interview day, and it was very nice getting to know the administrators. It helped me get an idea of what the school was like.”

Due to the close-knit nature of many optometry schools and colleges, applicants also get the unique opportunity to speak with current students. According to Knapp, this was very helpful in giving her an overview of what her study schedule would look like. There are additional benefits to the size of optometry programs.

“Since optometry schools tend to be small, it is located all in one building versus most other medical programs which are spread across several buildings. This makes it a very convenient option. Also, every interview provided lunch,” added Knapp.

Knapp’s interest in the field of optometry was first sparked after contracting a severe eye infection as a child. Receiving treatment prompted Knapp to want to go into the specialty of ocular disease so that she could help people in similar situations.

“I plan on specializing in ocular disease, because I believe that is how I would make the best contribution as a Doctor of Optometry. I’m also thinking of doing a residency in pediatric optometry because I enjoy working with kids,” said Knapp.

Knapp is a hardworking biology major, and she loves science in general. In fact, she further found her passion for optometry in a physics class.

“It [the physics class] made me really excited to be a Doctor of Optometry. Everything about your vision is physics, such as finding the strength of a prescription for glasses. I am really looking forward to the next three-to-four years,” said Knapp.

Knapp is very focused on her academics, and her friends even joke that she never leaves the library. In addition to being a dedicated student, Knapp is Ole Miss’s Homecoming Queen, a show choir national champion, a student ambassador, and an active member of Ole Miss’s Pre-Optometry club.

“The club helps guide undergraduate students who are interested in optometry. We talk about strategies for the OAT, and the club helps prepare students for their optometry school applications,” said Knapp.

She also helps to plan fun, inclusive student activities and special events at Ole Miss that provide students with a break from classes. According to Knapp, she considers her extracurricular involvement to be her free time.

“These aren’t resume builders to me. They’re genuinely fun activities, such as laser tag,” explained Knapp.

Knapp is a very involved student, both inside and outside of the classroom. She is an Ole Miss Tour Guide, and says orientations are always fun because incoming freshmen never know what to expect, but being an orientation leader allows her to show them how great Ole Miss is and guide them along the way.

As a first-generation college student, Knapp has a lot of firsthand wisdom to share with these incoming students. While at times being a first-generation student can be frustrating when she asks her parents for college-related advice and they can’t help, she has maneuvered her studies largely on her own, and her Ole Miss advisors were very helpful.

“Even though it was intimidating to leave home and go so far, my parents are very proud. It can be difficult when they can’t help me prepare for optometry school interviews, but it is so rewarding. One of my professors who is also a first-generation college student actually wrote one of my letters of recommendation,” said Knapp.

Knapp’s aspirations for her future include a residency in either ocular disease or pediatric optometry. She then hopes to open her own private practice and work there for several years.

“I’d also eventually like to go back and teach somewhere, because I enjoy teaching and I love that mentor-mentee relationship. I want to give back to the school I attend through sharing what I’ve learned,” added Knapp.

Good luck Ciara! We hope you will stay in touch with us once you begin school!