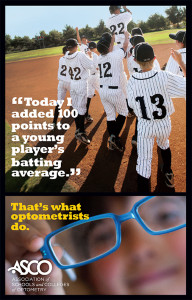 Every patient presents a new challenge.

Optometry is a stimulating and rewarding career based in patient care and the most highly valued human sense: sight. Today’s practitioner is no longer just a provider of eyeglasses or contact lenses; optometry is both an art and a science, focusing on health and quality of life. Doctors of Optometry carefully consider the interrelationships between all of a patient’s biological systems, and understand the effect of systemic changes on a patient’s health, including ocular health. By treating the whole patient, optometrists have the opportunity to change lives every day.

“Today I returned the joy of bird watching to a homebound senior.”

Advanced vision loss had robbed an elderly woman of a treasured pastime: watching birds from her picture window. With adaptive visual aids prescribed by her optometrist, she now has a brighter outlook on life.

“Today I helped save the life of a young mother.”

Devastated by the loss of a child in the sixth month of pregnancy, a young mother came to her optometrist complaining of double vision. For months, health care providers had dismissed her complaint, attributing it to stress and bereavement.

As the optometrist sat chatting with her patient, she noticed that the woman’s right eye bulged slightly and its movement to the right was severely restricted. Suspecting some kind of mass, the optometrist immediately ordered imaging tests, which revealed a brain tumor behind her right eye. The tumor was removed, along with a portion of bone, and reconstructive surgery followed. Grateful to be alive, this 37-year-old mother of two greets her optometrist with a hug at every appointment.

“Today I gave a hockey player another shot at the Stanley Cup.”

Sidelined for a year and still not ready to return to the ice, the hockey pro was beginning to think his concussion was a career-ender. Despite the best medical care the league could offer, mysterious symptoms—including pressure behind the eyes, problems with balance and spatial awareness, and dizziness in open spaces and when rotating his head—lingered. A four-hour assessment by an optometrist traced the symptoms to concussion-related vision dysfunction. Over the course of four months, the player visited the optometrist for several extended, one-on-one vision therapy sessions; between visits, the optometrist monitored his patient’s progress and modified his therapy through email, text and video chat. With his vision function restored to its pre-concussion levels, not only did the defenseman strap on his skates the following season, he also put in the best performance of his career, helping his team make it to the Stanley Cup playoffs.

“Today I showed a baby a world full of small wonders.”

The young mother was shocked by the optometrist’s news: her nine-month-old son had congenital cataracts. She hadn’t suspected anything to be wrong with her baby’s eyes, but only wanted to take advantage of a public health program offering free comprehensive eye assessments to infants in their first year of life. The optometrist reassured the anxious mother, counseled her on treatment and provided follow-up care. Once the cataracts were removed, the boy’s parents immediately noticed how intently he now stared at tiny details: the embroidery on his mother’s sweater, the stubble on his father’s chin. The baby’s world–and his connection to his parents–had come into sharper focus.

“Today I shortened a wounded warrior’s road to recovery.”

The soldier’s visual symptoms were typical of veterans recovering from traumatic brain injury sustained on the battlefields of Iraq and Afghanistan: blurred vision, photosensitivity and severe dry eyes. Through her work at a Veterans Affairs medical center, his Doctor of Optometry well knew that such residual symptoms are complex, multisensory and often neurologically based. They also require the collaborative care of an interprofessional health care team. Over the course of several months, the optometrist worked closely with her colleagues on the wounded vet’s care. Tinted corrective lenses addressed his photosensitivity, while scleral contact lenses, which buffer the eye with artificial tears, eased the discomfort from his extreme dry eyes. While the team continues to work with the veteran on his pain and frequent headaches, relief of his debilitating eye symptoms puts him one step closer to recovery.

“Today I made sure a working man would keep working.”

Fearful of losing his livelihood, the heavy machinery operator fought his fading eyesight with denial. By the time he finally sought care, glaucoma had left him too visually impaired to drive. The optometrist knew his 46-year-old patient needed more than medical therapy–he needed a new direction in life. Over the next three years, the optometrist guided his patient through the support system for the visually impaired–disability benefits, job-training programs, low-vision rehabilitation and education–while managing a therapeutic regimen that slowed the disease’s progression. With his new skills, this family man landed a different position within his company, and today welcomes the future with hope rather than fear.

“Today I kept a survivor’s hope from dimming.”

Within 12 hours of the massive earthquake that devastated Haiti in 2010, leaving a quarter of a million people dead, the first medical team of foreign physicians arrived at a makeshift field hospital at the Port-au-Prince airport. Weeks later, a young optometrist joined the effort. From a tent pitched on a small runway, he screened hundreds of destitute survivors who were at risk of ocular infections. One patient, a young man, had developed severe bacterial conjunctivitis, which the optometrist quickly treated. Left undiagnosed, this simple infection could have led to blindness – compounding the tragedy for a victim who had already undergone reconstructive surgery after his eye and facial bones were partially crushed in the earthquake.