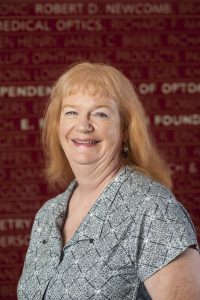 Each July, ASCO swears in a new President to serve for the year. This year’s President, Dr. Karla Zadnik, sat down with ASCO’s Director of Communications to talk about the next twelve months.

ASCO: Dr. Zadnik, congratulations on being named ASCO President for fiscal year 2016-2017. What excites you the most and what do you think will challenge you the most this year?

Dr. Karla Zadnik: Thank you. I am looking forward to the challenge provided by the ASCO’s Presidency. What excites me the most as I look toward the upcoming year is working on the ASCO Strategic Plan. ASCO hasn’t had a new Strategic Plan in 14 years, and it’s time to attend to this important initiative and look ahead to and plan for the future. I am excited to lead the strategic planning process for the organization.

ASCO: What will be your main priorities this year?

KZ: We will play to our strengths and continue to work on projects we have already started. I like the idea that ASCO will help its Board members, who are Deans and Presidents of our 23 optometric institutions, become better Deans and Presidents, but I am equally excited at the thought of helping our institutions’ Chief Academic Officers become better leaders. We have initiatives, such as the Summer Institute for Faculty Development, that help new faculty gain knowledge and enhance the skills that will lead to a successful academic career. We also want to give other administrators the necessary training so they too are successful through workshops, webinars, tutorials, mentoring, onsite training, and leadership seminars. ASCO will help enrich its Board members and other members.

ASCO: How will ASCO staff help in implementing the Plan?

KZ: ASCO staff is vital to its successful implementation. The organizations I have led are different than my day job. Those on ASCO’s committees, task forces, and Special Interest Groups are volunteers. Even the simplest ideas by volunteers would be impossible to implement. We need staff to implement them. Staff is vital in any volunteer organization to really get the work done.

KZ: My story may be trite, but it’s true. My paternal grandfather was an optometrist. He died at 91, when I was 16. He practiced in Stow, Ohio in a practice in the basement of his house. After he died I declared I would also become an optometrist. After I graduated from high school, we moved to California, where I completed my undergraduate prerequisites and then went to UC Berkeley for optometry school.

I completed a rotation in specialty contact lenses during my fourth year at Berkeley Optometry that changed my career trajectory. After my rotation was over, the supervising optometrist asked if I would be interested in more hands-on learning in the Department of Ophthalmology at Stanford University. After fitting an aphakic baby with contact lenses in the operating room, I was hooked. When the same kind of position opened up at the University of California, Davis, I delivered direct patient care in the areas of specialty contact lenses, anterior segment, and low vision.

I loved the job at Davis but didn’t get bitten by the “academic bug” until after I published a paper or two and received encouraging feedback. I loved that I could perform some research, write a paper, a journal would publish it, and people would read it and learn something from it. I thought, “Oh, this is so cool.”

That is when I started to ramp up my academic activities and received invitations to speak at conferences and seminars. I became a fellow in the American Academy of Optometry and then a Diplomate in its Section on Cornea and Contact Lenses, but I was in a department of ophthalmology, and I was an optometrist, which limited my future. That’s when I applied for a training grant slot at Berkeley to work toward my PhD. Entering academia was the best decision I have ever made. The timing was right. I had a three-year old daughter when I started graduate school and had my second daughter while attending graduate school. My husband was extraordinarily supportive through it all; he still is.

People ask me how I balance it all. My response is: Somehow, you just do.

ASCO: What piece of advice would you give to a student who is interested in becoming a Doctor of Optometry or a student who has the aptitude but may not know about optometry?

For the latter, for people who are changing careers or majoring in something other than the sciences, I would tell them about all the opportunities they have to work with people. Math and science academic competence is required, but there is also the small business aspect to optometry as a career. If someone has an entrepreneurial spirit, I would suggest optometry as a career.

For both groups of people, those who are on the optometry track during college and those who discover it later in life, I tell them optometry is a happy profession. We can help most of the people most of the time. We are mostly fixers; people have things we can treat. Optometrists make a good living, and they make that living by helping people in a very significant way.

ASCO: On a more personal note, tell us about you a little. What was the last vacation you took? Last good book you read; any hobbies, etc.

KZ: My main hobby is quilting. I have been making large and small quilts and machine sewing them for 18 years. My favorite vacation spot is Nantucket, MA. It’s been an important place to my family ever since we celebrated my parent’s 50th wedding anniversary there in 1989. Kurt, my husband, and I have been married for 37 years and we have two daughters, Andra and Nina. Andra just got married in California. We are a small family, but we are a deeply connected family.

Every other summer we host the Summer Research Institute, co-sponsored by the American Optometric Association and the American Academy of Optometry, and this year we had a lobster dinner in our backyard for 50 people. It was a magical night—perfect weather and literally hundreds of fireflies in the grass and the trees. I like to think the future of optometric research was eating lobster at my house.

ASCO: And lastly, I’d be remiss if I don’t talk about The Ohio State, specifically sports. Are you an OSU sports fan? How do you think the teams will do this year? Planning on going to any games? What is your favorite sport?

KZ: It is impossible to move to this institution and NOT be an Ohio State sports fan! Of course you think of the football team when you think of Ohio State and the Big Ten. We are, of course, fans of the football team, but we also hold season tickets to men’s and women’s basketball. People may be surprised how great the women are doing – check them out on the Big Ten channel. They are great fun to watch.

ASCO: Thank you for your time Dr. Karla Zadnik!