Getting to Know Dr. David A. Heath, ASCO President 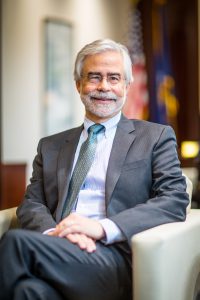 Recently ASCO’s Director of Communications sat down with Dr. David Heath to discuss his role as ASCO President.

ASCO: Dr. Heath, you were ASCO President for fiscal year 2012-2013 and now you’re President again this year. Welcome back. What changes have you seen in optometric education in these past years?

Dr. Heath: First let me say that I am honored that I was asked to serve a second stint as ASCO’s President. I’ve been involved with ASCO throughout my career and believe strongly in the leadership role it plays in the advancement of our profession.

It’s actually only been two years since I finished my first term, but there have been changes. The changes are more within our healthcare and educational environments, than within optometric education per se. With the continued evolution of health care reform, expanding scopes of practice, the expectations for Interprofessional Practice (IPP) and emerging technologies, the future practice of optometry will be fundamentally different from what it is today. It is incumbent upon ASCO and its member institutions to anticipate those changes and educate our students for future practice – I think our Deans and Presidents are more than ready for the challenge.

ASCO: What will be your main priorities this year and how have they changed and evolved since 2012?

Dr. Heath: This year is ASCO’s 75th Anniversary. Anniversaries serve as milestones and often cause us to look back and reflect. In ASCO’s case, our 75th coincides with a significant transition of leadership within the organization and, while mindful of our past, it will serve as a catalyst to look forward. I like to believe that ASCO has changed significantly in the last several years; becoming far more proactive and demonstrating leadership both within our profession and outside of it through developing relationships with other health profession organizations.

During the coming year, while continuing the many programs we already deliver, we will be conducting a comprehensive strategic planning process which will set the stage for ASCO’s future. This process, combined with the assimilation of our new Executive Director into the organization, pretty much fills the plate for the year ahead. That said, I would highlight one event in particular. We will be tackling an issue that has really emerged over the past few years and that is the challenge of preparing our students for collaborative, team-based care through interprofessional education (IPE). Dr. Jenny Coyle, now our immediate past-president, has been a leading voice for ASCO’s involvement with IPE and she will be leading a Summit on Interprofessional Education that will take place in Fullerton, California in early February. I think it’s going to be a terrific program and it is very timely.

ASCO: How will ASCO staff help in implementing your priorities?

Dr. Heath: First it is important to recognize that the staff in any association that depends upon volunteerism is absolutely essential in advancing the organization. We’re very fortunate to have a top-notch staff at ASCO who have done a fabulous job. We couldn’t do what we do without them.

As the coming year will include the first change of Executive Directors in nearly 25 years and the initiation of the strategic planning process, changes will occur and priorities will shift.   While change can sometimes cause angst, it can also open up tremendous opportunities for our organization and those who serve it. The ASCO staff can be most helpful, first by continuing to do what they have been doing so well, but also by embracing change and the opportunities that can come with it.

ASCO: Speaking of ASCO staff, we’d be remiss if we didn’t bring up a very big change in the ASCO administrative office. After nearly 25 years, Executive Director Marty Wall is retiring and Dawn Mancuso has been appointed Executive Director. She will begin her tenure with ASCO on August 31. Tell us a little bit about Ms. Mancuso and why she was chosen as ED.

Dr. Heath: I was so pleased when I heard that Dawn had accepted the position of ASCO Executive Director. She brings a real depth of experience as an association executive along with a strong background in strategic planning and experience with the healthcare sector. During the interview process, Dawn seemed to naturally connect with the entire community. It was very easy to see that she would fit in well. Interestingly as happenstance would have it, I’ve crossed paths with a couple of association executives who knew of Dawn from the American Society of Association Executives; both shared (unsolicited) that we had found a terrific ED. I’m really looking forward to working with her during the coming year. You should do one of these with her!

ASCO: What are you looking forward to the most this year?

Dr. Heath: I am honored at being asked to serve as President for a second go round. That said, I believe my role is to lead during a period of significant transition and to set the stage for the future by working with and, indeed, supporting the entire organization in the strategic planning process. What am I looking forward to? I’m looking forward to looking back and seeing that we have accomplished what we set out to do.

ASCO: Where did your passion for optometric education come from?

Dr. Heath: I’m not sure I can point to a specific source of inspiration, but I do know that being involved in optometric education and serving in leadership roles allows me to merge a lot of interests while knowing that I can make a significant impact in advancing the profession. Over my career I’ve had many roles, but I’ve always been able to positively affect patients, students, faculty and others both on an individual level and by effecting improvement at the programmatic and the institutional level as well. As President of the SUNY College of Optometry, I get to do it all, it’s a real joy.

ASCO: What piece of advice would you give to a student who is interested in becoming an optometrist? Or a student who has the aptitude but may not know about optometry?

Dr. Heath: Obviously, I think optometry is great profession and I would encourage anyone interested in the health professions to consider it. The one recommendation that I would emphasize for anyone considering a health profession as a career is to research, research and do more research about the future of health care and specifically about the field they are interested in. Most candidates for admission do visit practices and shadow the doc to get a sense of “a day in the life” of the optometrist. The reality though is that what they see today may not be what they are getting tomorrow, so it is important that they try to understand future trends and how those trends may impact the future delivery of care. That’s actually a tall order for someone in the middle of their college years. Optometry is a fantastic profession, but they do need to be prepared for ever present change.

ASCO: On a more personal note, tell us about you a little. What was the last vacation you took? Last good book you read; any hobbies, etc.

Dr. Heath: I probably don’t take vacations as often as I should, but your timing is great. My wife, Jeannine and I just took two weeks in early May to go to Italy. We hit the key cities of Rome, Florence and Venice and it was wonderful. Unfortunately our last big vacation was four years before that. I have to admit that I don’t have much time for hobbies, but I grab rounds of golf whenever I can and junk mystery novels are my airplane vice.