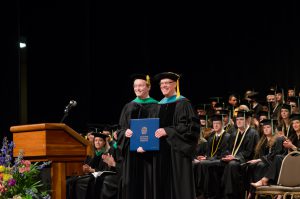 ROCKVILLE, MD, May 12, 2015 – The Association of Schools and Colleges of Optometry’s (ASCO) Executive Director, Marty Wall, was an honorary degree recipient of the Doctor of Humane Letters at Southern College of Optometry’s (SCO) graduation ceremony on May 8.

Marty was given this prestigious degree to commemorate his distinguished career in academic optometry, specifically as ASCO’s Executive Director for almost 25 years.

“Marty has distinguished himself as a leader in the Association world and has been our leader for decades,” says Lewis Reich, OD, PhD Interim President, Southern College of Optometry. “Everyone at SCO welcomed the opportunity to show our gratitude and respect to Marty in this way.”

“As I complete nearly 25 years as ASCO’s Executive Director it is an incredible and unexpected honor to be awarded an honorary Doctoral degree from SCO,” says Marty. “It has been a pleasure and privilege to have served and represented the schools and colleges of optometry for so long and to have participated in the development of ASCO as the leadership organization representing the optometric academic enterprise. Interim President Reich, previous Presidents Cochran and Phillips, and the SCO staff and faculty have been most gracious and kind to me from the time I began at ASCO. This special honor is a highlight of my association career and I thank everyone involved and all those in optometric education and the profession who have extended their well wishes as I begin this next life phase.”

The Association of Schools and Colleges of Optometry (ASCO) is a non-profit association representing the interests of optometric education. Founded in 1941 and headquartered in Rockville, MD, ASCO is committed to achieving excellence in optometric education and to helping its member institutions prepare well-qualified graduates for entrance into the profession of optometry. Its membership encompasses the schools and colleges of optometry in the 50 states and Puerto Rico. A number of optometry schools outside the United States are affiliate members.